The Importance of the CEO on Company Culture

In this post, I’d like to reflect on the importance of the CEO on company culture and the influence that they play on its growth over time. For the past 5 years, I have been studying the responsibilities of the CEO in an effort to best characterize the role for my company. Reading articles, books, and speaking with other entrepreneurs has given me a strong understanding of why the CEO exists and the impact that they are expected to have within their organization.

I write about the 10 essential responsibilities of the CEO in The CEO Role: Ins and Outs of a CEO’s Daily Life to give you a better understanding of what exactly the CEO does all day. One of the biggest areas that the CEO has an impact on is the culture of the company.

The CEO and the Company Culture

A company culture stems from the beliefs and actions of the CEO. As the CEO, you are responsible for crafting the mission statement, visionary direction, guiding values, and work environment habits. While there is usually a surrounding executive team, it is almost always the CEO that sets the tone for how the company functions.

In my studies, I have interviewed multiple CEO’s and read books about some of the greatest CEO’s to date. I’d like to use my experience and their stories to depict how important it is to understand the CEO in order to understand the company’s “brain.” For those of you who are CEO’s, these examples should provide examples of how you can make a significant impact on the progress and organization of your company.

Let’s first start with the tech company that has slowly infiltrated our lives with innovative solutions to organizing the information of the world. Larry Page and Sergey Brin founded Google while studying for their Masters in Computer Science at Stanford University.

Both already unique in their own sense, they quickly clicked. But before we get into the future that they created, let’s rewind 20 years and recognize their upbringing that would eventually influence the culture that they forged at Google.

Both Larry and Sergey attended Montessori schools as children. For those of you that don’t know, a Montessori school is a privately-owned and run school that takes a different approach to schooling elementary aged children. Rather than teaching children to regurgitate information from textbooks, Montessori schools attempt to design an environment where the student is able to make decisions, learn from experience, and create their own growth trajectory. Larry and Sergey’s unique educational experience as children would pave the way that their minds worked.

At the time that they decided to break away from their formal studies to focus their attention on building Google, they started to envision the future of the company. They said that they wanted a campus, similar to a university where their employees could live, research, work, and play. They wanted their workplace to be fun and free of hierarchies where their team could take control of their own projects – a theory very popular within the Monetssori education.

Today, Google is a spinning image of what they envisioned and Larry Page has continued to drive the company culture forward with his own beliefs and ambitions. Why does Google focus on building driverless cars, solving human aging, and developing Google Glass? I argue because Larry drives the culture.

Read more about the impact that Larry and Sergey had on the founding and growth of Google in Steven Levy‘s In The Plex: How Google Thinks, Works, and Shapes Our Lives.

The second CEO that I would like to look at is Elon Musk, founder and CEO of Tesla and SpaceX. In Ashley Vance’s recent book released in 2015 following Musk’s life to date, the mindset and drive of Elon is clearly demonstrated with supporting examples from his time working on PayPal, ZipCar, Tesla, SolarCity, and SpaceX.

Growing up, Musk was regularly bullied at his school in South Africa because of his size and nerdy habits. He had a fascination for computer gaming and spent a lot of his free time building new games to keep himself entertained. Today, he continues to follow his passion for engineering and physics while he runs both Tesla Motors and SpaceX.

Futuristic at the time that he began working on the company, Tesla Motors is a car manufacturing company that produces high-end luxury electric cars and sells them to the masses. Just recently, Tesla released their most anticipated Tesla Model X, the company’s first SUV which seats 7 and supports doors that open vertically.

Musk introducing the Model X in 2015.

SpaceX is Musk’s effort at fulfilling his ultimate vision of making Mars another planet for people to safely travel to and live on. Since starting the company, he has built and launched over 20 rockets into space with multiple successes and even more failures. Today, the company continues to work on a luxury shuttle that will allow humans to purchase tickets to Mars.

It has taken Elon tens of years of hard work, small successes, and great struggles to get the companies to where they are today. At multiple points throughout his career, the media has come down hard on him proclaiming his projects to be a flop. The success of both companies could not have been reached without his charisma, determination, and direct impact on his employees.

Elon Musk does not simply run the companies that he has created. Rather, he takes them by the hand and propels them forward with his genius.

One of the greatest ways that the CEO can make a true impact on their culture is through the vision they communicate and the involvement they make in the operations of the company. Musk utilizes both to cultivate a culture from the first day that anyone is hired.

New employees are introduced to the company as a place where Musk’s visions will come true and you will do everything you can to contribute to it. You will work long hours, work weekends, skip lunches, and make sure that deadlines are met.

Musk only hires individuals with amazing talent and an even stronger work ethic because of the standards that he holds himself to. At his companies, there is zero tolerance for slacking off.

How does he keep the intense, rigorous culture alive?

He leads by example at all times. Musk is a CEO that knows how to do everything within his companies because of his passion for continuous learning and studying. It is not out of the ordinary to see Musk on the manufacturing floor explaining how an employee can do their job better. He cares about his team’s performance at all times and he makes himself available to ensure all goes as planned.

Read more about Elon Musk and his visionary tale in Elon Musk: Tesla, SpaceX, and the Quest for a Fantastic Future by Ashlee Vance. It’s available for only $16.99 if you download it on your Kindle.

My Experience as CEO at Portlight

When I first became the CEO of Portlight in 2014, I knew that I wanted to create a culture focused on the visions of the company and a set of values that would come to define our workforce. I wanted to create an environment where the team came to work with an ultimate end in mind and a love for what they were doing everyday. From my own experience, I had discovered that the more you enjoy your work and environment, the more productive you become.

As I progressed through the years as CEO of the company, I took lessons learned from individuals like Page, Brin, and Musk and incorporated them into the growth of our company culture. I worked diligently to infuse our growing team with a set of values and cultural habits that would hold us together like glue when the times got tough. 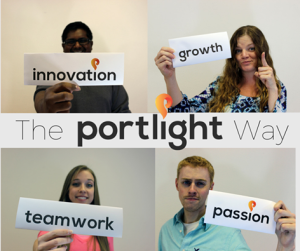 In October 2014, the company had grown to over 45 team members and we hit our first major roadblock as we prepared for the holiday season. Our communication with Amazon had slightly faltered, new policies had been created, and we were placed on a temporary suspension cutting off revenue until we were able to explain our faults to Amazon.

In fear of how the team would take the news, I attempted to be as honest as possible while instilling hope that we would figure the situation out together. To a bit of my surprise, I discovered a powerful bond and belief that had been created throughout our team within the past year of growth. When presented with the news, the team was eager to learn more, identify the root causes, and create solutions as quickly as possible. In the following week, we came together as a team in honorable fashion and had our selling account reinstated.

Looking back on the event almost exactly a year ago, I realize that the work we had done to implement a strong culture built off of our beliefs and attitudes was the reason why our team reacted in such a positive manner. As CEO and founders of the company, we always preached that there is a solution to every problem we face…it just takes time and team work to reach that solution.

The Inevitable Impact of the CEO on Company Culture

Whether intentional or not, the CEO of the company sets the stage for the culture that is adopted by its workforce. I have provided you with three examples where vision is used to create a culture that fights, survives, and thrives through the most trying times.

There are a multitude of other ways that a culture can also be effectively created and communicated. For those of you interested in learning more about how the culture of your company was created, ask around or set up a meeting with your CEO (if applicable). Study the attitude and belief of your direct bosses and I guarantee that the way they treat people is a direct reflection of the company culture within your team.

For those of you who are CEOs, I encourage you to take a step back to evaluate the culture of your company. Is it what you want it to be? How are you influencing the culture? Could you be performing differently to make a greater impact?

If you’re interested in reading content similar to the importance of the CEO on company culture, sign up to the blog’s email list. I’ll keep you up to date with new columns, special offers, and free products. You can also check out the Leadership section of this blog for similar columns on how individuals make an impact on their team and organization.

This is merely my opinion and I am always open to hearing others’ ideas. Let me know if you agree or disagree with the statement that the CEO has the greatest impact on the culture of a company below in the Comments section.

He is the co-founder of EcomBalance and Outsource School. His writing has appeared in Forbes, Inc, Entrepreneur, and other leading publications online. He has scaled multiple companies to 7 and 8 figures per year. He was the co-founder of FreeUp, which was acquired in 2019 by The HOTH. He lives in Denver, Colorado.

Learn the skills, knowledge, and tools you need to be an 8 figure entrepreneur.